What are you going to be when you grow up? - Herdmark Media 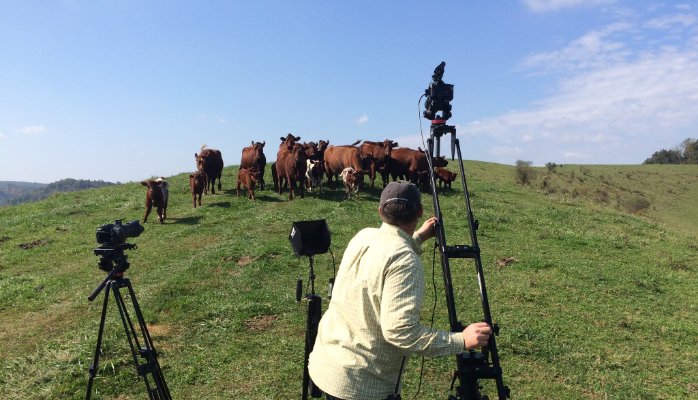 What are you going to be when you grow up?

I was about three years into being a professional cow photographer when I realized cow photography had become my entire life. I was eating, sleeping and breathing cow photos. (OK, so I wasn't sleeping, I was just editing.) By year four or five, I knew everything I ever wanted know about taking a cow photo. No matter the situation, it was no longer an experiment, it was just science.

Somewhere along the way I figured out that what I was going to be in life (my job) wasn't all that important, but rather I would need to concentrate on who I was going to be if I was going to make a difference in the world. I realized I was capable of being so much more than just a cow photographer. I began to learn how to produce videos. I began experimenting with creative photography. I began to pay attention to digital marketing. My world began to change.

Then, on a beautiful spring day in Manhattan, Kansas, I stopped to visit my good friend Brad Fahrmeier. I pulled in the farm lane, got out of the rental car and was met with a greeting I never expected.

We walked out to a camper parked just down the lane, around which sat the most awesome mix of camera equipment and hunting gear you've ever seen. It was turkey season in Kansas and this crew was ready for the hunt. There were three guys inside the camper huddled around a MacBook Pro watching some video and reviewing photographs.

I spent the next hour watching the most amazing hunting videos I'd ever seen and asking a million questions. These guys did impressive work. Creatively, this was the kind of work I was starting to get into myself. My mind was reeling with possibilities about how I could do the same thing for agriculture these guys were doing for hunting.

After getting the full tour of the spread at the Fahrmeier ranch (and pulling some CIDR’s), I was headed east to photograph some more A.I. sires, but the wheels on my car weren't the only things spinning. In that moment, I once again knew what I wanted to be, only this time, it was based around an understanding of who I was; a creative artist who was passionate about making cool work, capturing great stories and sharing them with the world.

I convinced my wife, Marlene, to join me in a full-time effort to organize our business. She brought some insane skills to the table and, after many twists and turns, we were able to package our unique individual abilities together into a company we called Herdmark Media, Inc. Today we are Called to tell the story of agriculture through exceptional photos and videos. Our little team works on amazing projects for even more amazing clients and it's easy for me to see who I am as a person streams into every facet of our business.

I truly love what I do today. I fully recognize my pattern shows I'll probably change my mind about what I want to be another time or two in my life, but I've finally found a career for myself that blends all of my skills into one amazing job. The only reason I found this path is because I began to concentrate on answering the question "Who am I going to be?" instead of focusing on "What am I going to be?”.

If you're struggling to figure out what you're going to be when you grow up, don't worry about it. Instead, just follow your heart and figure out who you're going to be first. In the meantime, do work and chase projects that interest you in some way. You'll look back on it and realize you were being prepared to do something very important with your life.

I'll leave you with this tip that will help your heart speak a little more clearly on the matter of who you are. You are: 25% Body (your physical existence), 25% Being (your spiritual self), 25% Bonds (your personal relationships), and 25% Business (what you do).

These are what are known as the Core Four. My friend and coach, Mark Jewell, tells us that Body, Being, Bonds and Business have to exist harmoniously, each carrying equal weight, in order to live a fulfilled life and achieve all you desire.

In contrast, our society tends to teach us from a young age that Business (what we're going to be when we grow up) is more important than any of the others. As a result, our society generates a whole lot of overworked, under-satisfied, unhappy people who aren't fulfilling their Calling in life.

Get to know the core four and start figuring out who you are going to be when you grow up. You're going to have to work hard along the way and you'll probably do a lot of stuff you don't like, but always remember; you're being prepared for something bigger. If you continue to work on who you are, sooner or later you'll receive your Calling, and in a crystal clear moment that nagging question will be answered once and forever, or at least for now!